The midday sun glowed in the sky and the light breeze patted me on my back as I climbed Cley Hill. The botanically rich mound is a naturists delight full of wild flowers, which act as high-rise flats to the swarm of insects that inhabit the hilltop.

I had mainly gone for the walk and had only brought a Canon Eos 450 camera and 18-55mm kit lens with me. I did give the lens a thorough test by photographing several of the Burnet moths that were invading the hillside. Ideally a 100mm macro lens would be more appropriate due to the insect’s size.  However, the results were surprisingly good, despite the limitations of the Canon 18-55mm kit lens, which has received very average reviews at best.

I hand held the camera, although a tripod would have been preferred. It was a case of patiently lying down in the long grass, waiting for the breeze to drop. Most of the images were shot at a shutter speed of around 1/320s and a aperture between f8 to f11. 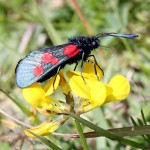 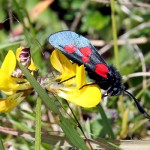 The five-spot burnet moth lives on damp grassland, chalk downland, and heaths. It flies during the daytime and is usually seen between May-September. Their red spots warn predators that they are not tasty to eat, they apparently contain small amounts cyanide.