This month I had chance to catch up with UK based photographer Nick Dimbleby who has extensive portfolio of automotive images. Nick has worked for Jaguar, Aston Martin and Land Rover to name a few. I thought I would find out how Nick became a commercial photographer.

Firstly Nick, congratulations on winning “The Headline Auto Photographer of the Year 2014” award. Lets rewind the clock a bit; who or what inspired you to become a photographer?

I became interested in photography when I was about 10. My father had an SLR camera, which I sort of took over when I was a teenager. I started taking pictures of cars because they interested me, which then developed into Land Rover when I started having pictures published in a magazine called Land Rover Owner from the age of 14. I also published a book called ‘Range Rover Conversions’ then, which was basically an excuse to get my photographs into print. As I was being paid for this, you could say that I have been earning a living from photography since I was 14!

As for cars, I spent a year in America when I was 2 years old in the mid-1970s, and being surrounded by huge American cars, my parents say that cars fascinated me then. I grew up in the countryside in the South West of England – an area that is very rural, with a lot of farms, and when I was 11 a neighbouring farmer asked my parents if I’d like to drive his 1978 Range Rover on the farm. You can imagine the deep impression your first driving experience off-road at the wheel of a Range Rover aged 11 would give you, so perhaps you can understand why I am particularly interested in Land Rovers and Range Rovers!

On average how many assistants or colleagues do you have working with you on a shoot?

I work with two assistants regularly, although it is rare for me to be working with more than one of them at a time! Depending on the type of shoot it is, then there will be other people along to help make the images. For example, for dynamic car photography, I need a precision driver who understands the requirements of shooting for photo or video. Quite often the best dynamic shots (notably for stills) are done at quite slow speeds, so it is important that the driver understands this and drives accordingly. It’s also typical to repeat the same bit of road quite a few times for drive-by shots, and a good driver is one that can match the line time after time so I know exactly where they will be in the frame.

For larger shoots, it is normal to have someone around to look after the vehicle – especially to keep it clean, as well as the client themselves, who will be keeping an eye on what we’re getting and making sure that it’s what they want! With secret cars that haven’t been revealed yet there is an even bigger team, with a truck driver to move the vehicles around on a covered transporter, security personnel from the manufacturer’s Company Protection team, location managers and even police who are employed to close roads temporarily to ensure that no-one sees the vehicle before it is launched! All this has to be organised way in advance, so it is quite a big undertaking!

What is the most challenging part of the job for you?

Making good shots in challenging circumstances. All too often there is not the budget for ‘weather days’, so if the weather is bad or less than ideal, we just have to get on with it! Photographing a car in the pouring rain and trying to produce images that make people want to be there, driving that car, is quite a difficult job. Couple that with it being a secret car and only being able to shoot in restricted locations for a limited amount of time, and it becomes quite tricky!

Do you have any photography tips?

Be prepared to get up early and always make an effort. Finding out as much as you can about the location you are going to is also a good idea. When is the best time to shoot? Will there be lots of people there? What’s the access like? Sometimes you get lucky, but it’s fair to say that – as in life in general – you tend to get back what you put in…

Finally, what’s your favourite photograph that you have taken?

That’s a tricky one, as I think I’m yet to take the ‘perfect picture’. I think the day I do is the day I ought to retire, so I think that’s a while off yet! There are so many photos that I like, but one that springs to mind is this simple yet effective shot that was taken way back in 2006 with a Hasselblad Xpan whilst on the G4 Challenge in Bolivia. At the end of the day, you can’t beat a bit of amazing light in an amazing place. 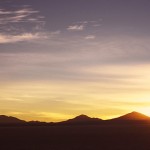