The Circus in Bath is one of the most celebrated examples of Georgian architecture in the city of Bath. The Grade I listed building was designed by the architect John Wood in 1754 and completed by his son in 1768. It is extremely popular with tourists and must be one of the most photographed buildings in the United Kingdom. It must also be one of the hardest to capture due to its round design?

One October in the early noughties  I decided to photograph the Bath Circus. I was using an Olympus OM-1 film camera and a borrowed Olympus 8mm fisheye lens. I positioned the camera in the middle of the Circus pointing upwards. After a short sprint to remove myself out of the picture frame, the shutter fired, I had now run out of film, the shot was the last negative.

I almost did not get the shot due to leaving the camera thirty meters away from were I was standing, hence inviting opportunists. It is funny now looking back as I never new I could run thirty meters in three seconds!

The image was published in 2006 as the front cover of The Bath Magazines. Please contact me if you are interested in purchasing a limited print. 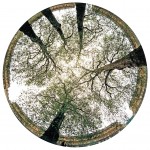