At the Format Festival this year I had the pleasure of meeting photographer Brian Griffin. We discussed his colourful career, which includes photographing many well-known characters ranging from Margaret Thatcher to Chewbacca from Star Wars.

I first became aware of Brian’s work through my love of music. He has taken iconic images of Siouxsie Sioux, Peter Gabriel, Kate Bush and Brian May to name but a few. I recently asked Brian a few questions about one of my favourite images of the Ska band, The Specials.

ST: Brian, what was the brief for this particular project?

BG: I’m told that this shoot was for Rolling Stone Magazine, however I faintly remember it being for the Radio Times. The brief was to shoot the Specials in a barbers shop in Coventry.

ST: Can you remember what camera set up you use?

BG: My camera was an Olympus OM1, a wonderful small 35mm SLR with super sharp lenses. I probably used a 35mm lens for this shoot, with the camera loaded with Tri-X or Ilford HP4 pushed at least a stop.

ST: The band seems pretty relaxed, was it easy working with them and how long did the photo shoot take?

BG: The band was easy to work with and the shoot would have taken a maximum of one hour, probably less.

ST: Have you any tips for photographing musicians, as they are notorious for not being the easiest to work with?

BG: Its quite difficult and most of the time boring photographing bands. The only tip I would give is tightly control them for they can be most unruly and ill disciplined. 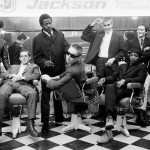 In 2012 Brian was selected to document the lead up to the Olymics. This series of carefully constructed portraits highlight Brian’s creative and individual approach to photography.

In 2013 Brian joined the likes of Don Mccullin, Annie Leibovitz, Elliott Erwitt, Martin Parr and Sebastiao Salgado, by being awarded the very exclusive RPS centenary medal, for recognition of his contribution to the art of photography.
http://www.briangriffin.co.uk