It is hot and very still, you could not ask for a better English summers day. It is 3rd of July, the Wimbledon Ladies semi-finals and the competition looks wide open. I am in the crowd on Centre Court for the first time, my seat is high up in the spectator area and the view is surprisingly good.

The first match is between Petra Kvitova and Lucie Safarova. The crowd goes quiet and their heads start to move like metronomes as the first set gets fiecely on its way. Both players hit the ball as hard as they can, as their legs start clocking up the miles……

Eventually, after fifty hard fought minutes, Kvitova grasps the first set. Safarova now faces the additional mental test to stay in the semi-final. However, Kvitova one of the best servers on the women’s circuit was in control and the match came to a quick end. Kvitova won and progressed to her second Wimbledon final.

You cannot take professional cameras into the championships, so I had my Fuji X-E2 with a 55-200mm telephoto lens. I managed to capture some of the action, despite being high up in the covered area. The trick was to fire at a fast shutter speed, 1/2000 sec or 1/4000 sec.

I have included one image of each of the four contestants and I will add some action shots to a gallery at a later date. 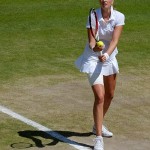 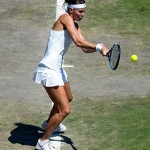 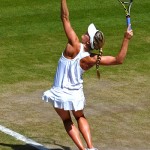 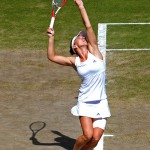 The second semi-final was between two of the most exciting ladies players to emerge in the last few years, both had performed fantastically so far this year. Simona Halep and Eugenie Bouchard created another tense first set with lots of rallies and oohs and aahs from the crowds. When Bouchard closed the first set in a tiebreaker, the match sped up similar way to the first semi-final and the young twenty year old booked her place in the final.

Wimbledon has a captivating atmosphere full of joy, tension, admiration and general fascination. This is a fantastic sporting event to photograph, watch and be part of. I look forward to the 2015 Championships.