A day at the races

The official UK launch of the Olympus 40-150mm f2.8 pro lens at Cheltenham racecourse gave me an opportunity to capture a day at the races. I tried out two Olympus lens, the new 40-150 and the 75mm f1.8 with the sole intention of recording a general overview of the event. Photographing the build up before a race, the crowds, the hats, the jockeys and of course a race.

It had rained heavily over the last 24 hours, however the ground was glistening where the sun had broken free of the clouds. The bright light was starting to create the perfect conditions to create some contrasting black and white images.

I headed to the races barriers after placing a bet on Fruits Of Molly. It seemed from the slight smile on the bookies face that Molly was a complete outsider. It seemed beginners luck had decided not to turn up as a few minutes later Molly trotted over in last place. I decided it was time to explore the plaza area at the bottom of the paddock, where a Statue of Best Mate stand’s, this was a good area to people watch and shoot the last few images. 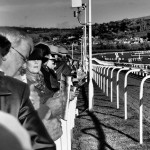 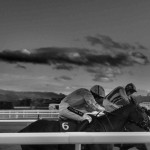 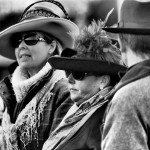 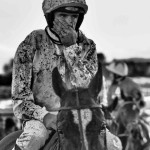 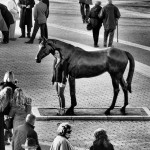 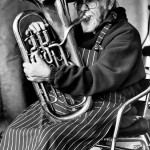 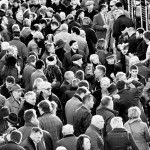 Crowds at the races