The Photographers Gallery is exhibiting the Deutsche Börse Photography Prize 2014 finalists. The standard of work is incredible high. The overall winter Richard Moss, produced very powerful, emotive and thought provoking work. His large prints engulf you due to the unnatural pinky red that is present in all the images. Sometimes this is mixed with a light turquoise which creates an unusual balanced.

So why have such strong vivid colours and what is it all about?

Richard Mosse documented the troubles that have been ongoing in eastern Democratic Republic of Congo since 1998. During this time millions of people have died due to the war. You have to pause when reading the exhibition statement, as the thought of what is happening is unimaginable.

The photographs were shot using discontinued surveillance film, which records an invisible spectrum of infrared light. This technique in my opinion underlines the horrific results of war combined with the complicated situation and feelings that are generated. The use of infrared film creates a series of images that I think symbolises the lives that have been lost. 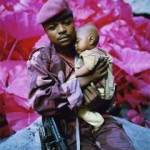 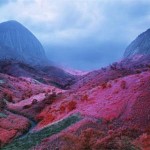