A day with a Olympus OM-D EM10 Mark II

It appears that the Japanese camera manufacturer Olympus has returned to its mythological roots, by which I mean Mount Olympus. The Greek mountain that the company is named after was said to be the home of twelve powerful Gods and Goddesses. It is this inspiration and aspiration that is reflected in the company’s ethos to produce high quality, world famous products.

This leads me aptly onto the brand new, yet strangely familiar Olympus OM-D EM10 mark II. How? Well back in 1973, when bell bottoms where all the rage and Glam Rockers pouted on the radio, Olympus designed the OM-1, a distinguished, classic SLR cameras that was light, small and pragmatically designed. The look is why I said strangely familiar, as you will observe from the images below the Om-D EM10 II has the same retro features as the OM-1 and the 1979 upgraded OM-1n. The obvious comparisons are the on/off switch and the edges of the top plate, which have the same indentations. I must admit it is these flashback design features that capture my interest, in the same way as listening to vinyl records. 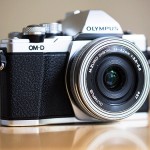 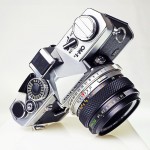 Still, if you aspire to having the latest technology do not despair, as this camera is packed with features. It has a super bright optical viewfinder, WIFI image sharing, angled LCD screen (ideal for low level macro work) and a 5 axis image stabilization system. The latter allowed me to shoot at 1/30th of a second, which as a consumer of strong coffee is truly remarkable.

Before I joined the M5 rush back to Bath I took one shot of the sun going down over surrounding Gloucestershire countryside. However, I was to find that the following morning was weather-wise less kind to me, the Gods and Goddesses had influenced the clouds to shut out the sun and eventually make their tears of rain fall over Bath. 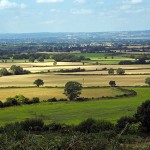 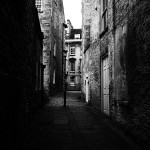 Still every cloud has a silver lining, as they say and now I had the perfect opportunity to take some atmospheric street shots. The end results were shaped by the contrasting black and white option on the camera. This mode created a wonderful sense of suspense and I thought it would be good for a film noir shoot.

As the rain continued to fall and bounce off the pavement (as if it was dancing to the music from Fantasia) I decided to head into Bath Abbey. This historical place has been a religious site since 757AD and is full of ornate and captivating features. This venue was a good place to successfully test the cameras low light capabilities. I continued these experiment once I had left the Abbey by photographing a few Saul Leiter inspired shop window reflections. 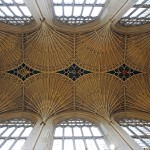 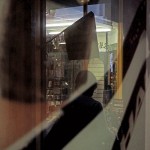 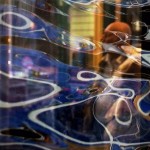 To bring the test to a close I visited the Roman Baths, which were originally built over 2000 years ago. At last the rain had taken a rest, as if it had seen sense and stopped crying over a trivial matter. However, as I photographed the water reflections in the baths it remained overcast. 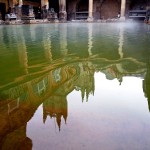 So to conclude, the Olympus OM-D EM10 Mark II will have a wide photographic appeal, from the discreet street observers, to itchy feet travel journalists, or indeed just enthusiastic photographers. All will be content with a light weight camera that can be taken anywhere to capture great images.